Cup on parade a Tiwi treat 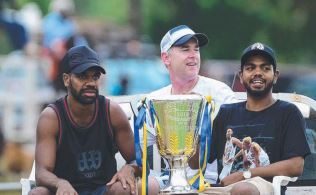 IF Australian football is a giant passion on the Tiwi Islands, the AFL premiership cup is the Holy Grail.

That was the way it was at Tiwi Oval on Bathurst Island yesterday when West Coast premiership coach Adam Simpson and premiership forwards Willie Rioli Jr and Liam Ryan showed the silver trophy to their adoring fans.

It was the first time Australia’s most sought after team trophy had made its way to the Tiwis, a twin island chain across the Beagle Gulf from Darwin that has produced four premiership players and six grand finalists.

Rioli’s smile told the whole story for the kid from Melville Island who put his body through the corridors of hell to make it to the last Saturday in September. “It’s pretty special, I never thought I would be the one to bring it up here, and to be able to do it with Adam and Liam is huge,’’ he told Sunday Territorian. “It’s good to show my people something like this is achievable and you can do it, I hope all the young people here today see what the cup looks like and start their own dreams.”

Rioli cannot wait to kick off his third season at West Coast and second as a player after a torn hamstring ruined his 2017 campaign. “I’m just keen to get back to training and around the boys, it’s going to be another big year,” he said. Simpson took a back seat to Rioli and his fans, 12 months after his first trip to the Far North. “We spent a few days here last year, which was great for Willie and his family, and it’s great to come back and show his family the cup,’’ he said. “Willie was huge for us this year.”