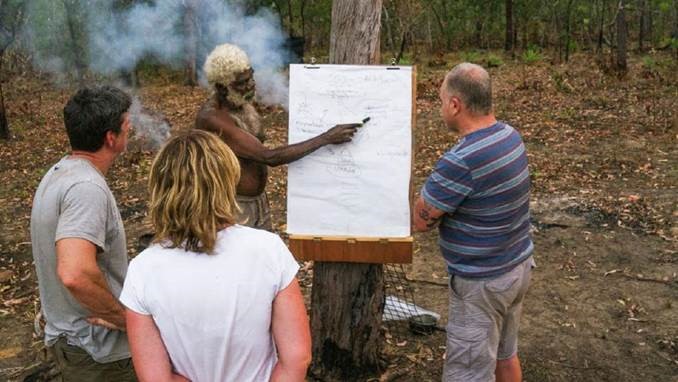 TIWI people are doing what they love – educating outsiders about their rich and ancient culture.

The Tarntipi Homelands Aboriginal Corporation has set up a bush camp on Bathurst Island.

People who go to the island to work – teachers, doctors, public servants, contractors and managers, plus tourists, academics and students – can stay at the camp for one or two nights to learn about Tiwi culture.

A grant under the Northern Territory Government’s Remote Aboriginal Development Fund will provide solar power at the camp, and tools and other equipment for a workspace.

It means the camp will be able to operate throughout the dry season.

“We’re very appreciative of the help given to us by the NT Government,” says Michael Massingham, a director of Tarntipi Homelands Aboriginal Corporation.

“They’ve made this project possible – a project with strong potential for economic success into the future.”

The grant will help the Tarntipi Homelands Aboriginal Corporation buy goods and services, such as solar power, tools, benches, lockable storage for equipment, chairs, tables and cabinets, and install a shade at the bush camp.

It will also help pay the travel costs of consultants, who are helping Tarntipi cultural education initiatives on country.

The bush camp is part of a wider drive to increase the capacity to do business, particularly local projects that will provide direct employment of Tiwi people as cultural educators in the already flourishing cross-cultural business.

The bush camp is the brainchild of Traditional Owner Teddy Portaminni.

“I bring visitors there to show them how Tiwi people have lived for a long time and to share my culture with them,” he says.

Visitors are driven to the bush camp, which is only 15 minutes from Wurrumiyanga, formerly Nguiu.

After a Welcome to Country ceremony, they take part in a range of traditional activities, including fishing and gathering mangrove worms – eating the worms is voluntary, but it should be noted that they are reputedly good for curing fevers.

The evening is spent cooking what was caught during the day at a campfire, dancing, and listening to stories and singing.